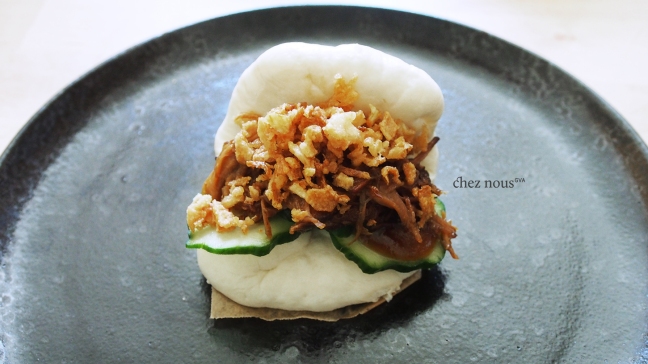 Today officially kick starts summer on this side of the world, and as you can see, everyone’s creeping out of hibernation or simply waking up from all the daily haze. There are these little things called distractions which disguise themselves as meaningful preoccupations, and I have to admit that I have fallen prey to these more often than I would like to admit. Especially in the last 4 months.

With the sun half-way out for the summer (not quite enough for the month of June!), my brain is at the very least sparking some motivation, inspiration and a sense of commitment (albeit delayed) thus this post. We have been M.I.A. on this space for a couple of months, but it has been quite eventful chez nous. The kitchen has definitely been full house and very very crazy. I’m very excited to share with you guys what’s been cooking recently!

First off, an Asian inspired finger-food spread. A few weeks ago, we organized an exhibit called “Graphic Canvas” which features illustrations by one of the best designers/illustrators from Manila, Dan Matutina. We’re huge fans of Dan’s works, so we thought it would be cool to share the love and bring his works to the locals here. The vernissage was also an exciting opportunity for us to make a yummy apéro menu, so the pots and pans were out getting busy for a bao and canapé party. 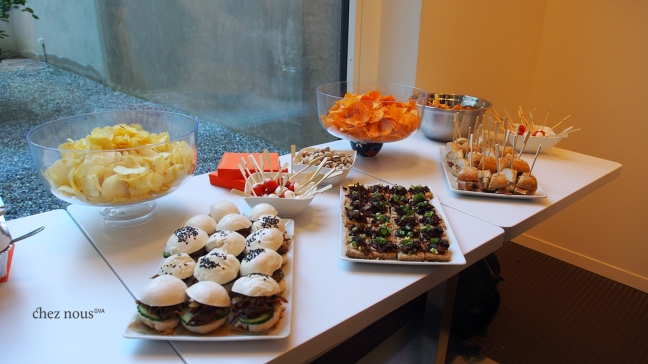 It was a fairly small event, so instead of having a big complex menu, we opted for 2 sure-hit dishes: Chashu Pork Baos and Adobo Flakes Canapés. Since the beginning of this year, I have had a fixation on everything Bao – siopaos, cua paos, and mantous! Having such a craving in this tiny city can be frustrating though as there aren’t a lot of options available or prices can get pretty steep for quite possibly a mediocre meal. The advantage though? Well, I learned how to make baos myself! Man, so pleased that it’s pretty doable! 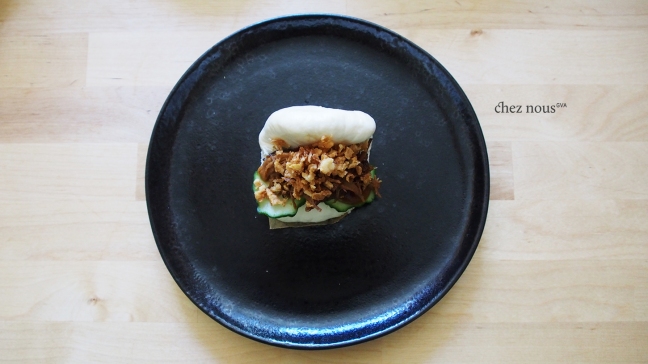 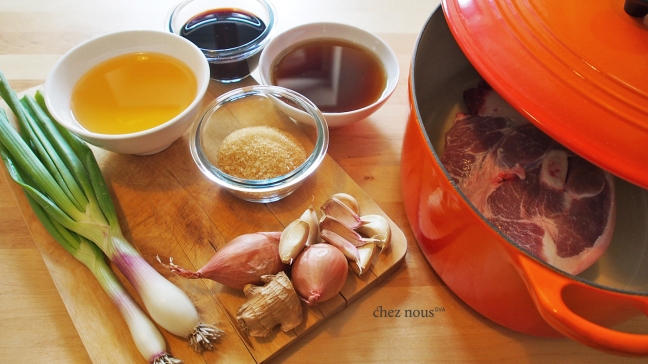 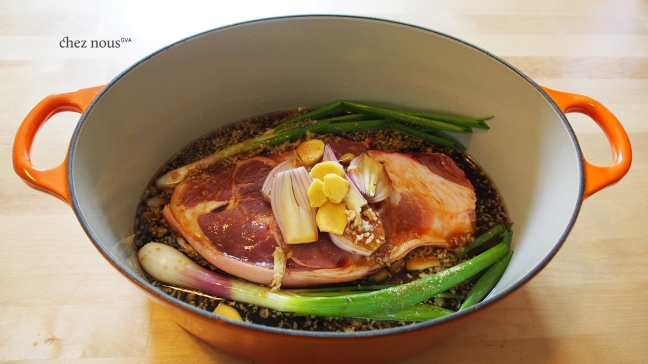 Since the Chashu called for at least 4 hours of cooking, we started with this first. Preheat the oven to 125°C. Put all ingredients together in a cocotte/dutch oven. Let it cook over over medium heat just until it gently boils. Transfer the cocotte in the oven and leave to braise for at least 4 hours (more if chunk of pork shoulder is quite thick). Do not forget to turn over the pork occasionally to make sure the colour and cooking is even.

Once it’s cooked, let it cool. Take out the pork from the cocotte, and pull out the meat. Drain the sauce to obtain a smooth liquid. You can thicken this sauce a little with a bit of cornstarch. Once you have your preferred consistency, you can put back the pulled pork and simmer together for 2-3 minutes.

While the pork was cooking in the oven, it’s the best time to make the Bao. In a big bowl, dissolve the instant yeast and sugar in the milk. Stir the mixture. Add the dumpling flour. Mix and knead the dough for 10 minutes. Add the vegetable oil, and then knead for another 10 minutes. Form one round mass with the dough, and leave it in a warm dark corner (covered with a cloth) for 60 minutes.

After an hour, your dough would have risen and expanded. Roll the dough into a sausage and cut into 12-16 small portions. You could make bigger buns too by cutting the dough into less but bigger portions. Flatten each piece and fold in the middle to make folded baos, or simply make smooth round balls for easy mini bao buns. Put wax paper at the bottom of each bun (and inside the fold if applicable) to make sure it won’t stick to your steamer. Arrange in the steaming racks. 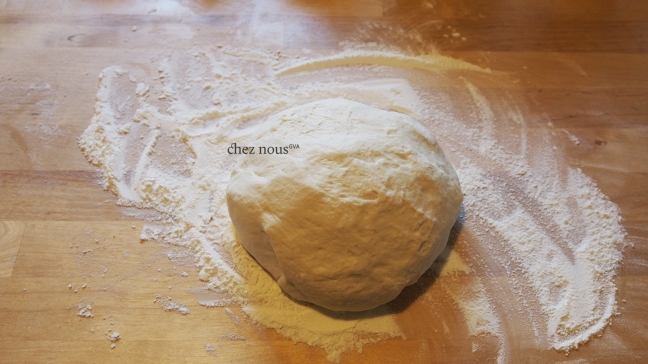 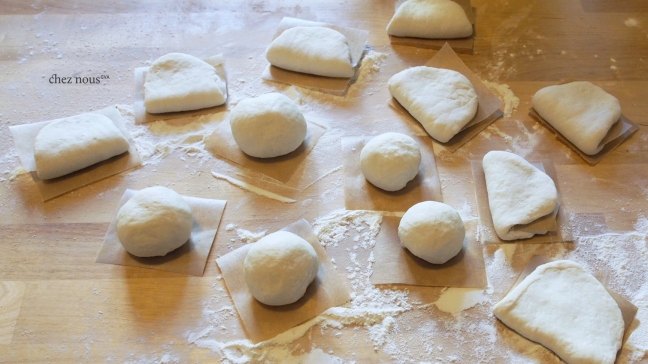 Boil water for the steamer. Once the water boils, add 2 spoons of vinegar (apparently, this is the secret to white as snow bao buns!).  Turn down the heat to medium heat and begin to steam the buns for about 15-20 minutes. Make sure to open and dry the lid regularly to keep your buns dry and puffy. And there you go, you have your baos! You can freeze your baos and re-steam whenever you feel like having them. 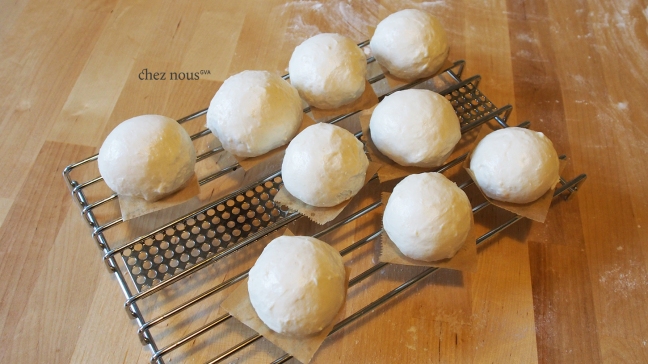 Now it’s time to assemble it all together. Spread a dollop of hoisin sauce on the inside of the bao fold. Place 2-4 slices of cucumber on top, and then a spoonful or two of pulled Chashu pork. Sprinkle a generous amount of crispy onions on top. Et voilà! 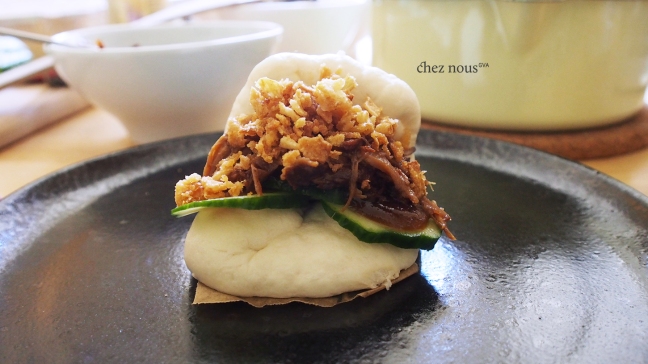 Seriously, I cannot get over how delicious these are. We will be experimenting on other fillings soon, so watch out.

In the meantime, bon appetit!✌︎

Sarah is a graphic designer + food creative + pseudo-photographer always looking for ways and venues to pop some creative experiments. Chez nous is a chronicle of these experiments and adventures from the kitchen table.